The 17 Best Wine Bars in NYC

Looking for a great wine bar? NYC's wine canteens are a rapidly growing local obsession among New York barflies. The rise of haute cocktails and homegrown craft beer bars may have once stolen wine's thunder with the masses, but grape aficionados haven't retreated into their cellars to sulk. Instead, they've reinvented the genre, tossing out stuffy pretenses, pushing into underserved 'hoods and creating funky, affordable vin lists paired with chef-driven bar fare. From the West Village to Williamsburg, sip and swirl your way through the best wine bars in NYC.

Find a wine bar in NYC 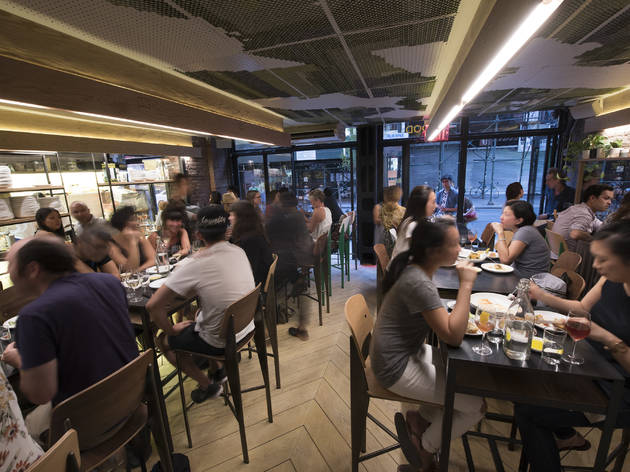 Located two doors down from the Lower East Side restaurant Contra, its tasting-menu sister from millennial chefs Jeremiah Stone and Fabián von Hauske Valtierra, the walk-ins–only operation at Wildair is an altogether scrappier beast. Self-serve silverware comes tucked beneath high-top schoolhouse tables; Andrew Bird’s warble and Karen O’s yelps mingle with the clang of small plates and the scrape of steel barstools; and the industrial room’s idea of ornament is a few spare shelves stocked with bottles of natural wines along the exposed-brick walls. Those vinos, brimming with funk and farm, are the focus of wine director Jorge Riera’s 100-selection list, a user-friendly lineup broken down simply by reds, whites and pétillant naturel, or pét-nat (a.k.a. sparkling). “These wines are made for the people, not the privileged, says Riera. 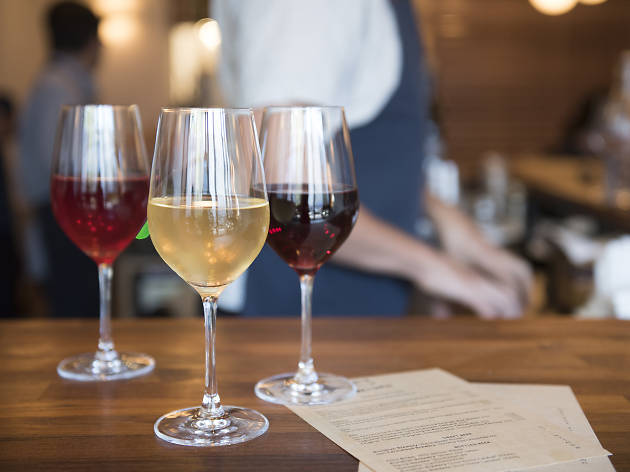 It can be hard for a drinkery to stand out in already-saturated Williamsburg, but it’s a lot easier when there’s a certified rock star behind it. At this natural-focused restaurant and vino bar, the big name in question is James Murphy, frontman of the beloved—and recently reunited—dance outfit LCD Soundsystem. That celeb involvement got the blogosphere buzzing, but the mellow haunt lives up to the hype. Big on bare wood and burlap—the cedar-slat ceiling and cloth-covered walls act as acoustic enhancers—the 40-seat room looks like the love child of a Kyoto sake bar and a Copenhagen coffeeshop. The interior sparseness is contrasted by a wine list comprising nearly 250 bottles and a dozen by-the-glass selections ($10 to $15) that highlight nat-wine heavyweights: Sicilian orange selections from Frank Cornelissen of Italy’s Mount Etna region and a biodynamic rosé from Fabien Jouves of Cahors, France. 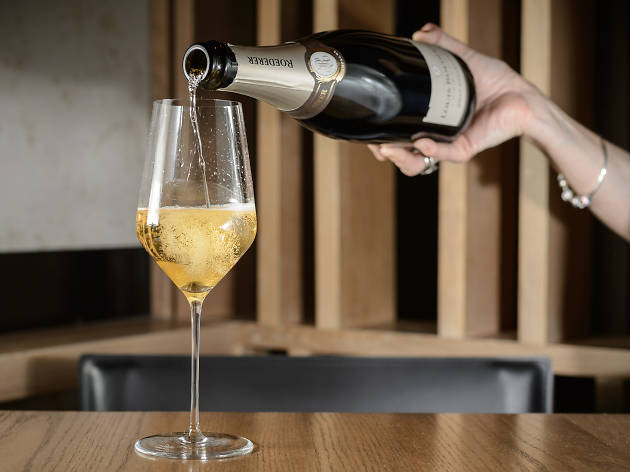 Branch-offs can often snap under pressure, but Le Bernardin has sprung a stem as strong as its base. Sitting across the galleria from that vaulted seafood restaurant, Aldo Sohm’s annexed vino hub is far less buttoned-up than its big brother—no reservations or suit jackets required—but the level of detail here proves this apple didn’t fall far from the tree. 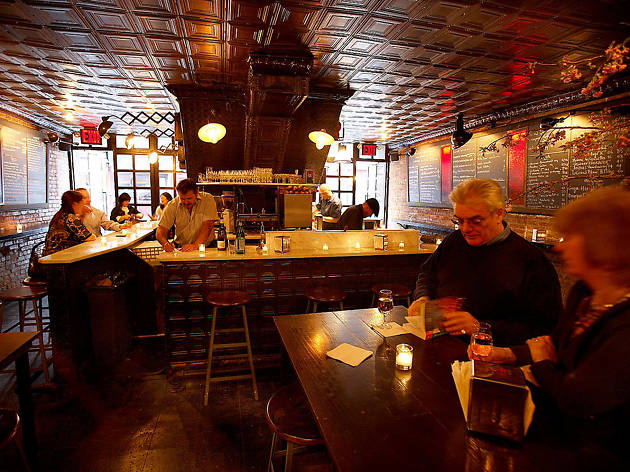 You’ll need a magnifying glass to navigate the chalk-drawn wine list at this dimly lit vino depot, oddly named for Jack the Ripper’s hunting grounds. Happily, knowledgeable servers are there to help, and the collection of global organic wines—16 glasses, most for less than $10, and 50 bottles—rewards your troubles. Standouts include Morocco’s fruit-forward Syrocco syrah or a floral Austrian Grüner Veltliner. Snacks are basic but tasty—stick to cold plates like oysters and tartares. 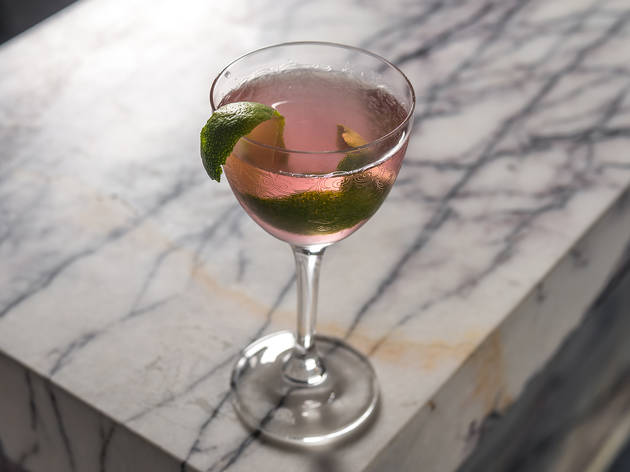 This Nolita rookie has restaurant bona fides in spades—it was one of only a few New York newcomers to earn a Michelin star last year off the strength of chef Daniel Eddy’s neobistro plates—but though it’s hesitant to brand itself as a full-blown wine bar, Rebelle is overflowing with vino clout. The cavernous dining room—a moodily lit stretch of raw-brick walls, polished concrete floors and a sinewy white-marble bar up front—comes from flannel-wearing wine wunderkinds Patrick Cappiello and Branden McRill, two thirds of the team behind Pearl & Ash next door. And while Rebelle’s dinner menu is 19 items total, the wine list is damn-near biblical: an 80-page tome boasting more than 1,500 French and American bottles, helpfully Organized by grape variety. 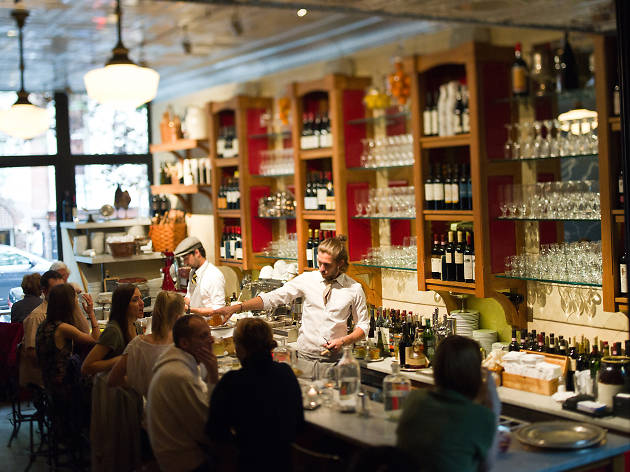 Over the past decade, Jody Williams has established a serious food-industry following. At the Gallic-themed Buvette, she's got just enough space to feed a neighborhood following. Indeed, with so little room for gastro-groupies, rhapsodic reviews may be the last thing she needs. Williams thrives in this intimate setting. She's filled every nook with old picnic baskets, teapots and silver trays, among other vintage ephemera. Even the bottles of wine seem to have been chosen as much for their aesthetics as their drinkability. 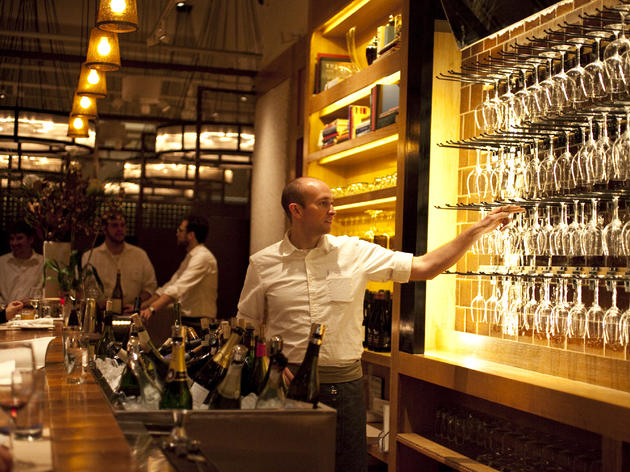 Every type of tippler needs a clubhouse. Oenophiles have a hangout of their own: Corkbuzz, a much-anticipated hybrid that offers a restaurant, wine bar and educational center within spitting distance of Union Square. With its design-mag decor and $15 glasses of wine, it doesn't quite have the for-the-people edge of Terroir. But the earnest educational angle, as well as the youthful energy of owner Laura Maniec, permeates the place and delivers its own inviting appeal. 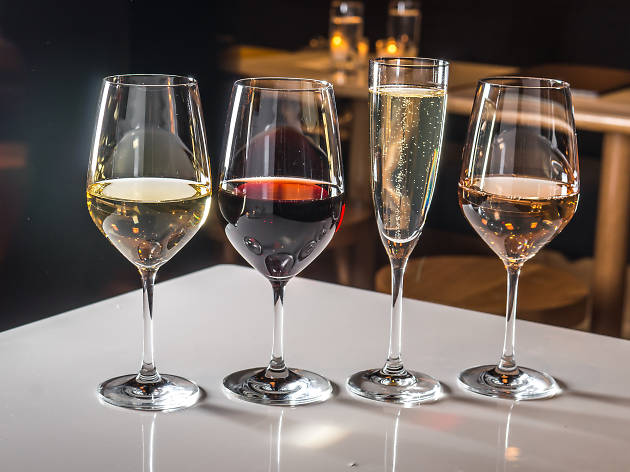 Owner Mandy Oser and chef Amorette Casaus already had one successful wine bar under their belts—Ardesia in Hell’s Kitchen—when they debuted this high-ceilinged Williamsburg follow-up in February 2015. The Camlin occupies the same sleek-but-casual domain as its midtown sibling, with light fixtures that look like they were swiped from a Scandinavian home-goods store and a 100-bottle list broken down by Old and New World regions, but the younger bar puts a premium on North American—and often offbeat—producers. “How the wine industry is developing in places like New Mexico and Idaho is fascinating,” says Oser. “Most guests haven’t had exposure to these wines but are really enthusiastic to try.” And try you should, testing out by-the-glass options like the peppery, plum-splashed 2011 Pinot Meunier ($14) from Ontario, Canada’s Vineland Estates. 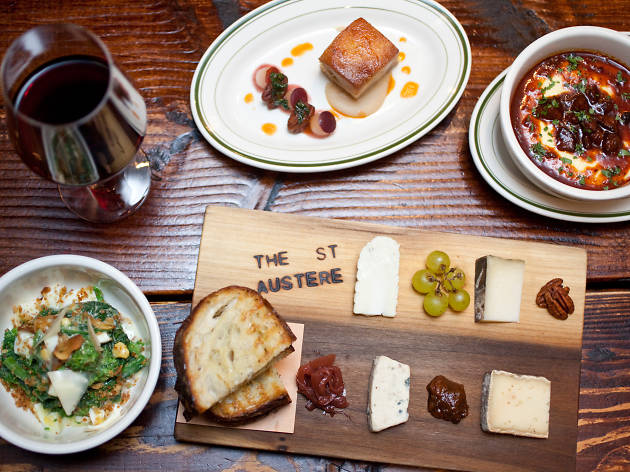 You'll find none of the typical wine-bar posturing at this Williamsburg spot, which ditches the trendy art and light jazz (relics of the '90s yuppie dens that first defined the genre) in favor of industrial accents (aluminum bar top, plumber's-pipe shelves) and old-school hip-hop. You might not even peg it as a wine bar until you spy the big wooden toolbox behind the bar, which doubles as a storage case for Old World wines served by the glass. The list is tight and well focused, with reasonable prices  and some choice picks from co-owner Fabrizio Pirolo, a former distributor. 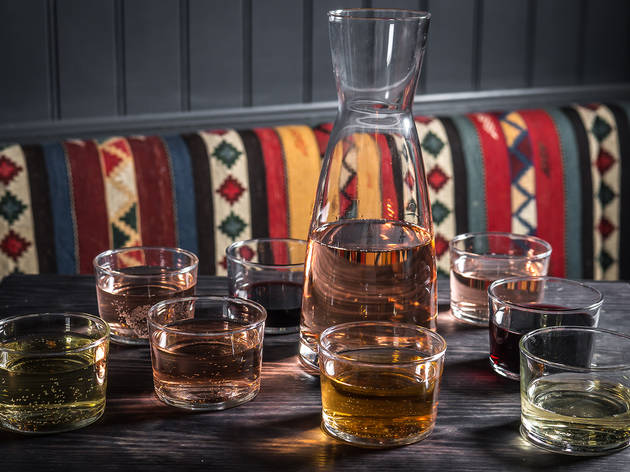 Craft beers and cocktails are the usual suspects on a bar’s tap line, but at this cozy, 550-square-foot haunt, 16 wines dominate the draft. That keg-friendly mentality is courtesy founders Phoebe Connell and Nora O’Malley, former managers of neighboring Alphabet City Beer Co. and Alphabet City Wine Co., respectively. The bottle-free setup isn’t only environmentally prudent (no labels or corks to dispose of) but also easier on the pocket: Production prices for tapped offerings are lower than the traditional bottled stuff, which means you can get a glass here for less than a latte. (Lois was also New York’s first bar to jump on the no-tipping bandwagon in 2015.) Pours are available in four sizes—from a 100 milliliter taste ($3 to $8) to a 1,000 milliliter shareable carafe ($34 to $58)—and they’re available until the kegs are kicked, with O’Malley’s rotating lineup announced via Instagram. 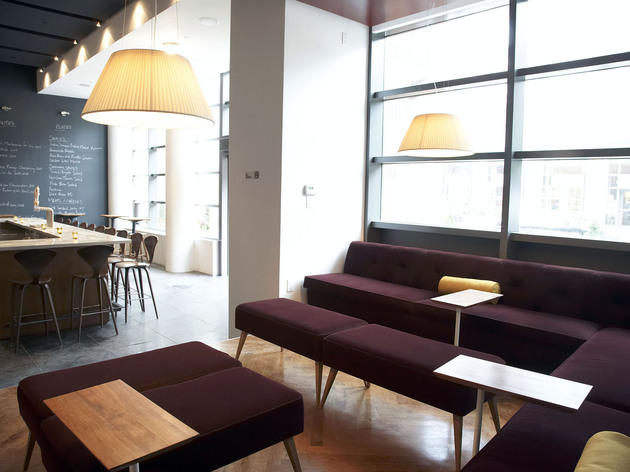 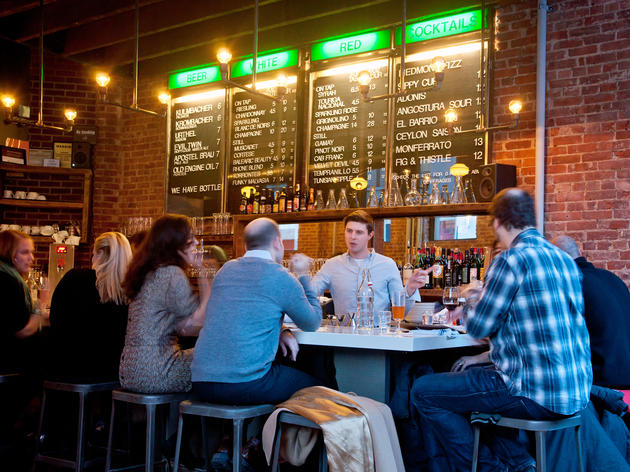 The menu here is rife with eccentric touches: vino on tap, an exotic all-European beer list and interesting food from chef Corey Cova. More than 50 wines are organized under user-friendly headers such as “rich, earthy, exotic reds” and “clean, crisp, refreshing whites,” with an eye toward offbeat producers. And those continental brews, including classics like Kulmbacher pilsner and beer-nerd bait such as Evil Twin Hop Flood, offer a refreshing detour from the all-American drafts that are de rigueur these days. 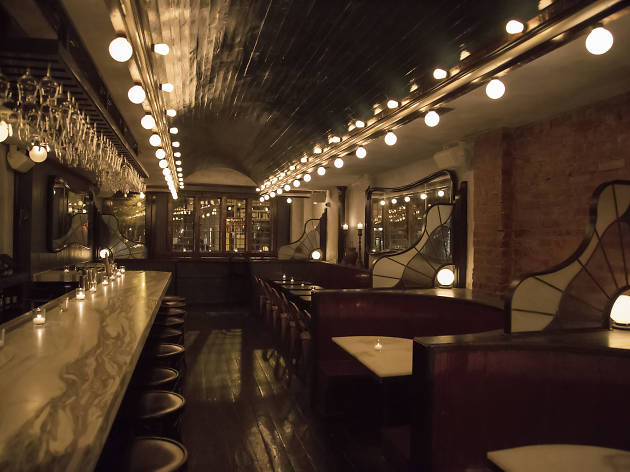 Dive deep into the all-natural trend at this sulfite-free–champing Cobble Hill bar, a joint effort from Henry Rich (Rucola, Fitzcarraldo) and Tom Kearney (Farm on Adderley). The romantic, railroad-style room rouses ’20s-era Midnight in Paris vibes, with curved oxblood banquettes, globe light fixtures and a marble-top bar canopied with hanging stemmed glasses, so it’s no surprise that the wine list operates largely in the Gallic canon, with European vintages offered by glass, quartino, bottle or “big bottle” (that would be one-and-a-half liters). Ease into the French funk with a bottle of the ’09 Cour Cheverny, a soil-earthy but citrus-soothed organic blanc from Loire Valley star Philippe Tessier ($61). 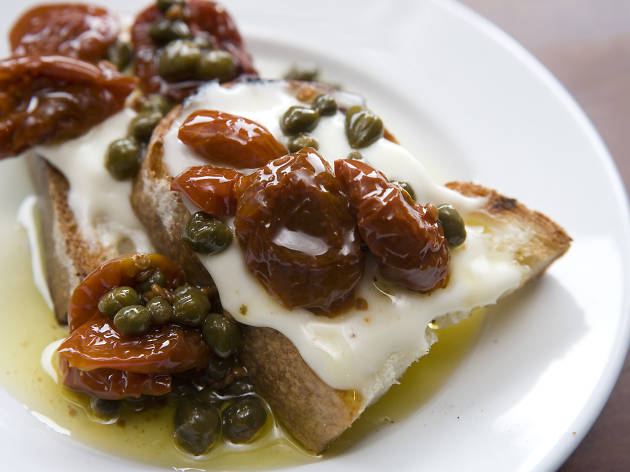 Jockey for a seat at this narrow enoteca, marked by a long marble bar, a piddling five tables and a menu of choice Italian nibbles to go with the all-Italian wine list. The least expensive glass goes for $9, and there are a few bottles under $40. Then attack the menu. Divided into salumi and cheese on one side, and prepared bites on the other, it provides multiple opportunities for memorable bites. 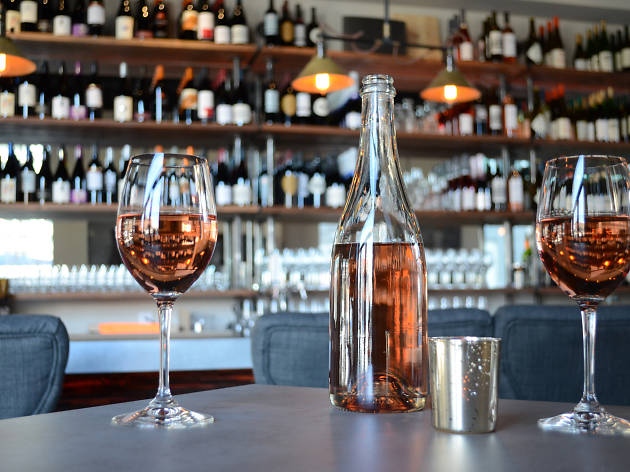 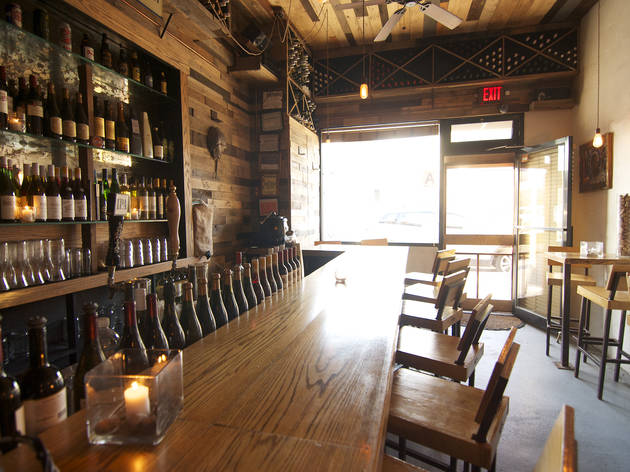 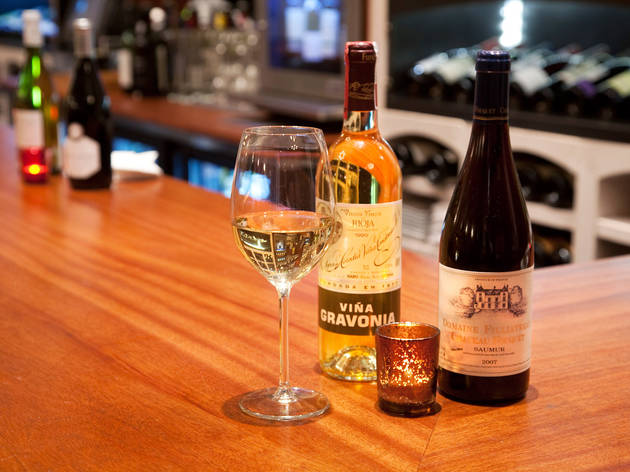 This UWS wine bar was conceived with the inquisitive drinker in mind. Though the interior is generic, the wine—a mostly organic and biodynamic collection of Old World bottles—more than makes up for the setting. The eager sommelier-barkeeps steered us toward offbeat discoveries like a rare white Gravonia rioja that was rich, raisiny and as viscous as sherry. There are also bargain gems like a crisp green-apple Chiorri Grechetto. Snacks from former Mercat chef David Seigal round out the experience.